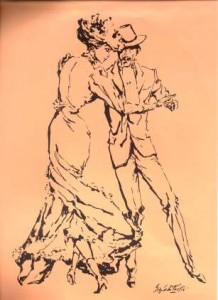 In the late 1800’s, millions of European immigrants arrived on the shores of the Rio de la Plata in South America, in the two port cities of Montevideo, Uruguay and Buenos Aires, Argentina. Most of them were Italian and Spanish, and the vast majority were single young men looking to make their fortunes in America. They brought their music: the sweet sounds of the violin, the driving flamenco guitar, the strange mournful wail of the bandoneon – and their dances: the waltz, the mazurka, the polka – and mixed them with the Argentine folk music and dance, with the Cuban habanera, with the African candombe rhythms from the freed slaves’ street parties. With very few women around, many of these young men found themselves looking for excitement in the bordello districts of the burgeoning port cities. The tango dance arose in these seedy waterfront areas from this turbulent mix, becoming a “mating dance” between barmaids and their customers in shady nightclubs. Shunned by the upper and middle classes in Argentina, it nevertheless became a sleazy fixture of urban nightlife in Buenos Aires. Young men in neighborhood gangs would practice the steps with each other in order to become skilled enough to win the attentions of a woman. A beginner would often dance the follower’s part for six months to a year before being shown how to lead.

As Argentina became very wealthy around the turn of the century, the sons of rich families would often look for adventure and excitement in the rougher parts of town, and learned the tango as part of their escapades. Some of these young men of privilege would show off the tango as a treat for their friends on their sojourns to Paris, then the cultural capital of the world. The Parisians were shocked and titillated by this raw, sensuous dance. This led to a “tango craze” that swept all of Europe, and reached America in the years just prior to World War I. New York newspapers in 1916 feature ads from over seven hundred tango establishments. While the original tango was disturbing to many arbiters of good taste, a heavily sanitized version of tango found its way into the European and American dance academies, where it remains a fixture in ballroom competitions today. 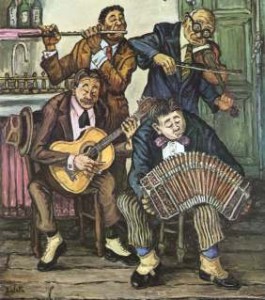 But in Argentina, the blessings of the tango-mad people of Paris led to an acceptance of the original homegrown tango in all classes of society. Tango musicians found themselves elevated from roughneck street performers to respected and adored composers. The tango dance became the courtship ritual of the middle class. In the ’40’s, the “Golden Age” of tango, every night found half a million people dancing from midnight until 3 or 4 in the morning. The best tango orchestras would be booked for more than a year in advance. Each neighborhood would feature its own variation of tango, and intense rivalries often turned dance competitions into riots ended by the police. Elaborate unwritten codes of behavior in the “milongas” or dance gatherings became as much a part of tango as the dance itself.

Influenced by the rise of repressive military dictatorships in Argentina after World War II, tango dancing slowly declined in the face of curfews and clampdowns on public gatherings. Tango music developed a rich new concert-hall tradition, more and more removed from the dance. The culture of late-night dancing went underground, and nearly all the regular milongas closed their doors. 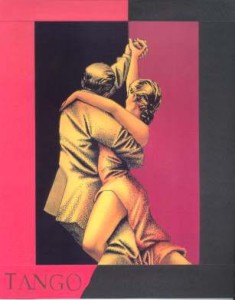 Accompanying the return of democracy and social liberalization after the Falklands War of 1982-83, a groundswell of interest in learning to tango surfaced throughout Argentine society. A younger generation of dancers and teachers began reclaiming their tango heritage while re-examining the structural underpinnings of the dance they had inherited. Simultaneously and independently, the Paris debut of “Tango Argentino”, a large tango touring stage production, brought the dance back to worldwide awareness. In theatrical reviews reminiscent of the shocked Parisians of two generations before, Broadway, London, and Paris again became enraptured by the smoldering passion in this exotic dance and music, cultivated in far-off Buenos Aires. A new generation of Argentine tango dancers, tango teachers, and tango musicians found receptive audiences for their country’s primary cultural export. Audiences first enraptured by the stage spectacle of the big tango shows discovered for themselves the passionate pleasures of the social dance connection, available to anyone willing to invest a minimum of time in learning the silent vocabulary of the dance. Today, major cities around the world (including the Denver/Boulder metro area) feature active tango communities where strangers and acquaintances can once again meet to share the sweetness of “the three minutes that can last a lifetime.”

37 comments on “History of Argentine Tango”